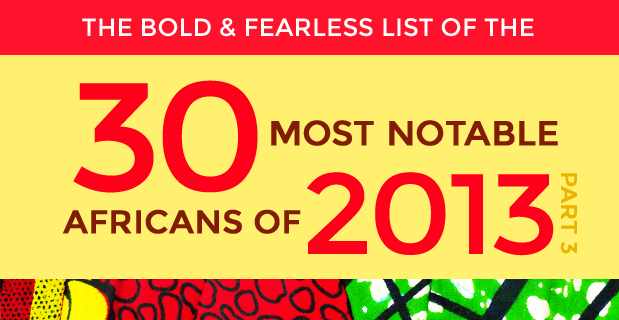 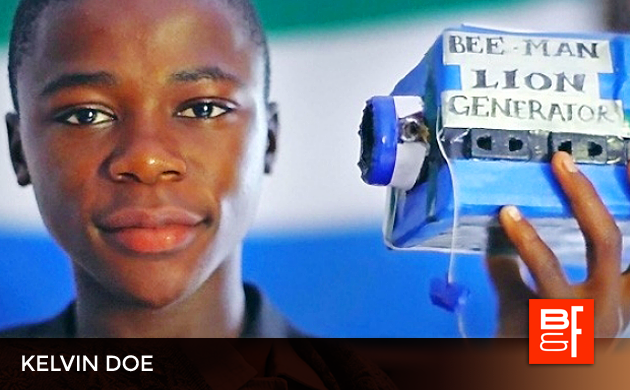 #8. KELVIN DOE
Country of Origin: SIERRA LEONE
What: The youngest person on this year’s list, this 18-year-old self-taught innovator has already made his mark on the world of science and technology. By the tender age of 13, Kelvin Doe had built transmitters, batteries, and even his own radio station from discarded scrap metal. On his radio station, he broadcast his music under the name “DJ Focus.” Why DJ Focus? Because he believes that if you focus, you can do invention perfectly. He gained widespread acclaim in Sierra Leone during an innovation competition where he built a generator from scrap metal. In 2012, with the help of his mentor and fellow Sierra Leonean innovator, David Sengeh, he was invited to the U.S. to participate as the youngest person ever in MIT’s Visiting Practitioner’s Program. Last year, he was named on Fast Company’s list of the 100 Most Creative People in Business of 2013.

Why I’m Inspired: In this TEDxTeen video, Doe has some words of wisdom that transcend age: “If I am asked to summarize the lessons of my life so far, there is one thing that I would say: creativity is universal and can be found in places where one does not expect to find it. And perseverance and passion are essential to nurturing that creative ability. Now that you know my story, I urge you to look for young people with talent, creative abilities and passion in all places. Not just in places that you would expect to find it. And I ask you to support these young people just as so many people have supported me. You never know, you might find the next ‘DJ Focus.’” Indeed innovation is alive and well in Africa.