Inspiration can come from the most unexpected places. It’s not until you hear about stories like Malala’s that you realize how much you take for-granted, and how much more you owe for the blessings you have.

In October 2012, Malala Yousafzai, a 16-year-old activist from Pakistan, was shot by the Taliban for speaking out about the right for girls to learn and obtain an education—something that the Taliban tried to ban in the predominantly Muslim country. As I watched the story on 20/20 a couple of weeks ago, my heart was in my throat. The idea that she was shot at point blank range in the head, in front of her classmates, and survived, is no less than a miracle. As a parent, I can’t imagine the horror of watching your child suffer through such trauma.

After being airlifted to England, Malala spent a few days in the hospital unconscious and in critical condition. When she finally woke up, her first concern wasn’t for herself—it was for her family, and making sure they were okay. Once she was reassured that they were fine and that they wouldn’t have to worry about the hospital bills (the Pakistani government took care of them) she went about the business of learning how to talk, walk and smile again.

What was even more amazing was Malala's resolve and the strength of her spirit. Considered the Mother Theresa of her generation and a young hero, her spunky, brave and forgiving spirit was so big, I felt it coming through the TV. That’s when you know someone has been touched by God and has a mission bigger than themselves here on earth.

In response to what seemed like a miraculous recovery (within less than a year she was walking, talking and learning again), she said,

“Death was not ready for me. God was looking out for me.”

Only ten months after her assassination attempt, she appeared on a global stage as a speaker at the UN to call for worldwide access to education for girls and women. Even after that trauma (and maybe even more so because of it), she continues to speak out and be a voice for the voiceless, promoting equal education and opportunity for women and girls around the world. And it’s working: shortly after her attack, the Pakistani government made education compulsory for all, including girls, and passed the Right to Education Bill.

I don’t think I have ever seen anyone so young and shy, be both poised and confident in her purpose at the same time. About her attackers she said:

“They thought the bullet would silence us, but they were wrong. [Today], weakness, fear and hopelessness die. Strength, courage and power are born.”

If that’s not bold and fearless, I don’t know what is. 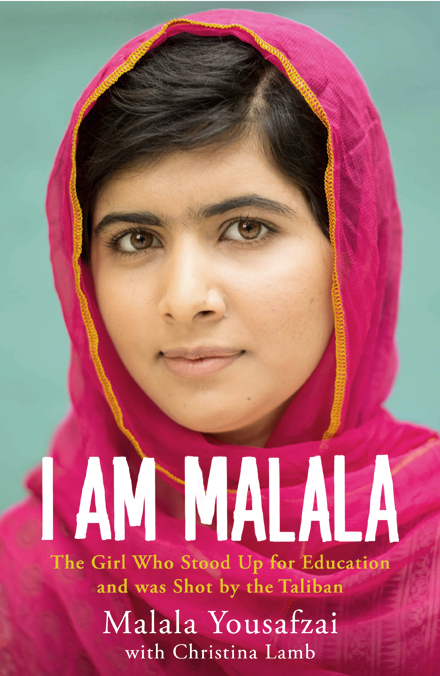 I Am Malala: The story of the youngest-ever nominee for the Nobel Peace Prize has been praised as awe inspiring, fascinating and a must-read.

Who has been the most surprising person to inspire you? Leave your comments below and let me know what you  you think.