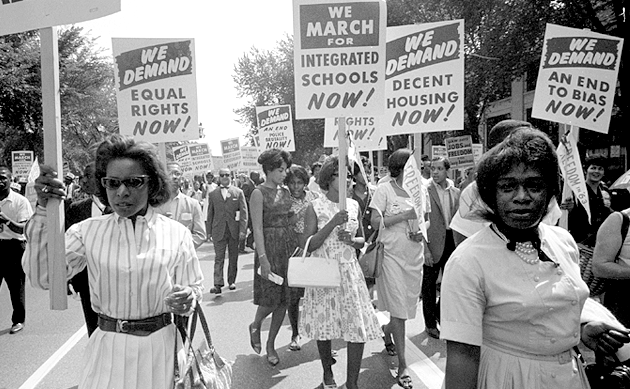 Although I understand the idea behind Women's History Month, I’m not a huge proponent of relegating our history to only one month of the year. We need to celebrate our sheroes year-round; however, since it is Women's History Month, this is a great opportunity to highlight some of the little-known stories of the powerful women who helped shape the Civil Rights Movement in America. Here are five you should know:

Claudette Colvin — Although many of us recognize Rosa Parks as the woman who sparked the Civil Rights Movement of the 1960s through her civil disobedience to give up her seat on a bus to a White man. Few of us know that nine months earlier in March 1955, a 15-year-old girl was arrested for the same “crime.”

Civil rights leaders felt Claudette Colvin was not an appropriate choice to be the front-runner for the movement because she was both too young and had become pregnant out of wedlock. Regardless, her contribution to the movement included testifying with four of her colleagues in federal court against bus segregation in Alabama. They won the case, which was upheld by the U.S. Supreme Court in 1956—effectively outlawing the practice of segregation on buses in Alabama.

One year later, Boynton lay beaten unconscious by police in what has now become known as Bloody Sunday, the march depicted in the 2014 movie Selma, and one she played a critical role in organizing. Those events were a major contributor to the signing of the 1965 Voting Rights Act. Still sharp at 103 years old, when asked in a recent CNN interview what she thought of the movie in which she is depicted by Lorraine Toussaint, she said, “…it was fantastic” and remind us that “You can never know where you are going unless you know where you have been.”

Daisy Bates — Most are familiar with the story of The Little Rock Nine who integrated Central High School in 1957, but how many know of the influential woman who helped the young students strategize in making history? Daisy Bates was born in Arkansas and adopted by a couple after her birth mother was raped and killed by three White men. Her father left her in the care of family friends after her adoptive mother died.

She married Christopher L.C. Bates, a journalist, in 1942 and the two founded the Arkansas State Press—a weekly African American newspaper that advocated for civil rights. She eventually became President of the Arkansas chapter of the NAACP and used her home as the headquarters for the fight to integrate Central high School. Her book, The Long Shadow of Little Rock recounts this historical milestone and was published in 1962 with a foreward by Eleanor Roosevelt. She was only one of two women to make remarks at the 1963 March on Washington, the other being Josephine Baker.

Fredi Washington — Before Halle Berry, there was Fredi Washington. Although Berry is credited with being the first African American actor to win an Academy Award in a leading role, Washington paved the way with her ground-breaking role in the movie Imitation of Life which was nominated for an Oscar for Best Picture in 1934. In the movie, Washington a mulatto herself, played a light skinned Black woman who decided to pass for white in order to gain access to better opportunities in a racially-charged America.

Even after receiving critical acclaim for this role, this talented actress found it difficult to find work in Hollywood because of her skin color. This led her to co-found the Negro Actors Guild in 1937. She later became a civil rights activist, working closely with the NAACP and continuing to be an outspoken critic of racism in Hollywood.

Anna Arnold Hedgeman — An educator, historian, and civil servant, Hedgeman was the first Black woman to hold a cabinet position in New York City when she was appointed as an aide by Mayor Robert Wagner in 1954—the same year as Brown vs. Board of Education. She was one of the only women at the helm of organizing the 1963 March on Washington. It is said that without her involvement, the March may never have happened.

When she found out that both A. Philip Randolph and Martin Luther King, Jr. were organizing competing marches in DC, she suggested the two men meet and form a unified front. This led to broader support and greater participation by leading organizations like the SCLC and NAACP. Her advocacy also led to women being included in the presentations on the podium during the March—something the men initially hadn’t considered.

I hope this list inspires you to discover more about the heroines of the continuing fight for civil rights. These women pioneers knew that #BlackLivesMatter.

**This post originally appeared on Black and Married With Kids.