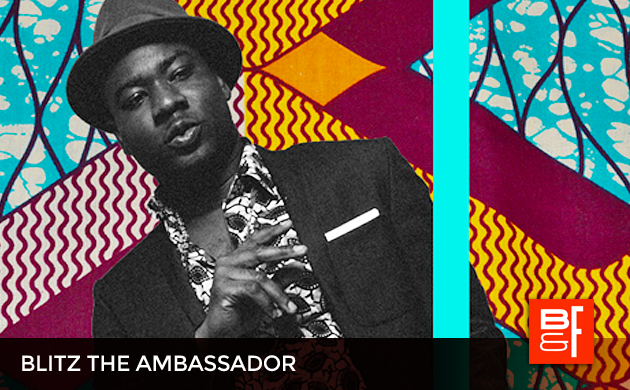 #2. Who: SAMUEL BAZAWULE aka BLITZ THE AMBASSADOR
Country of Origin: GHANA

What: What do you get when you cross American Hip Hop with the Fela-inspired sounds of Afrobeat? “Google” Blitz the Ambassador, and you’ll get your answer. This Ghana-born, New York-based entertainer has been on the popular music scene since 2004 when, Soul Rebel, his first album was released. Finding it difficult to get the major record companies to pick up his music, Blitz decided to create his own label to promote his artistry and Embassy MVMT was born. His latest album, Afropolitan Dreams, dropped in 2013 to international acclaim. The album is a musical journey documenting the African immigrant experience in America.

Why I’m Inspired: Besides making socially conscious music that paints the continent in vivid colors and rhythmic sounds for those who take a listen, Blitz is also a passionate filmmaker committed to telling stories from the continent. In this interview, he says, “I’m absolutely in love with being able to capture life as it is [in Africa]… Often, I feel like our stories are never told in full detail. [They’re] never nuanced in our characters. It’s always [about] war…bloodshed, or conflict diamonds. All these preconceived notions that end up being our typecast in movies… [My filmmaking is] really about capturing the continent beautifully.” I got you, Blitz. I love Africa too.